were completed in all classes. With around 10 knots from West the weather situation was

quite difficult and sailors and race committee had to correspond to many shifts.

yesterday. Including one discard, Van Laer Wannes (BEL) is leading with 4 points, followed

by his fellow countryman Belcan Lander (BEL) with 8 points. On third place is the Austrian

At the second race in the Laser Radial class 10 sailors were black flag disqualified. Compared

is yesterday’s third Hrabric David (CRO) with 10 points. One point behind are the third

Also in the Laser 4.7 class the results remained unchanged. The leading Vadnai Benjamin

with 5 points, followed by Wagen Kilian (SUI) with 7 points.

The tight results after four races will promise thrilling matches in the next days. With the

weather forecast being sunny for the weekend all are looking forward to sailing tomorrow. 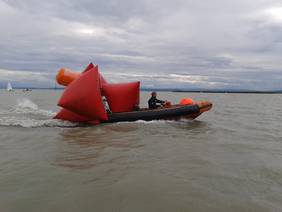