At the first day of the Laser Europacup, that takes place in the Yachclub Breitenbrunn,
Austria, from 8th – 11th September 2011, 86 sailors from 12 Nations competed in 2 races.
Race officer Helmut Czasny, AUT, started the first race with 16 knots ground wind and highs
of 18 knots from North-West. At the second race the wind slightly decreased to 8-10 knots.
In the Laser Radial class the Russian Nikolaev Maxim is on first place, followed by Zekan
Mario and Hrabic David both from Croatia. Overall 30 sailors competed in the Radial class.
Also in the Laser Standard class 30 sailors were on the start. After the first day two sailors
from Belgium, Van Laer Wannes and Balecan Lander, are leading the results. On third place
Claus Dapeci is the best Austrian sailor in the Standard class. 26 sailors started in the Laser
4.7 class. Vadnai Benjamin from Hungary is first after two races. Second and third place were
reached by the Swiss sailors Schneiter Sebastian and Wagen Kilian.
For tomorrow the third race is scheduled for 11 am. The organizing committee, the jury
and all competitors all hope for good wind and weather conditions to sail the next fair and
challenging races. 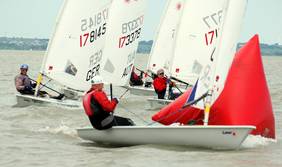